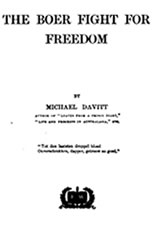 Preface. After resigning membership of the British House of Commons in October, 1899, as a personal and political protest against a war which I believed to be the greatest infamy of the nineteenth century, I proceeded, a short time afterwards, to the Transvaal to see and learn more about the little nation against whose liberty and land this crime had been planned and executed. ...