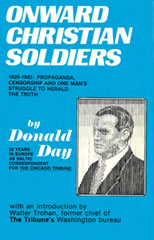 Why I did not go Home. The American consul in Stockholm telephoned ordering me to appear at his office with my passport. It was a summons I had been awaiting ever since Litvinov arrived in Washington as Soviet ambassador. I obeyed but without my passport. It had been handed to the hotel porter several days previously to obtain new ration cards as I had just returned from a visit to my home in Helsinki. I asked the consul why he wanted my passport. He said the American State Department had ordered that it be taken from me. I was to be sent home immediately. There were no reasons given for this action. When I said I did not have my passport with me the consul said he had already sent messengers to the police and the ration card office looking for it. It appeared as though they wanted my passport very badly. He said this was correct and refused to give me permission to return to Helsinki to close the bureau of The Chicago Tribune and my apartment and settle my personal affairs. I said this matter required some consideration and left. I decided to return tQ Helsinki and cabled this decision to Colonel McCormick, publisher of The Chicago Tribune, informing him how the state department was trying to force me to return to the United States. I told him I could remain in Europe if he wished and could continue to forward news to The Tribune through Switzerland. It was not until five days later that I received the reply which ordered me home. ...