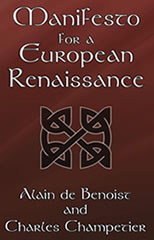 Editors preface. This manifesto was reprinted by the kind permission of Alain de Benoist. It was originally published in Éléments 94, February 1999, pp. 11-23, as ‘Manifeste pour une renaissance européenne: À la découverte du GRECE, Son histoire, ses idées, son organisation’. This translation was published in Telos 115, Spring 1999, pp. 117-144, under the title ‘The French New Right in the Year 2000’, and is by Martin Bendelow and Francis Greene. Telos was also generous in allowing us to reprint their translation. GRECE (Groupement de recherche et d’études pour la civilisation européenne, or Research Group for the Study of European Civilisation) was founded by Alain de Benoist and his colleagues in Paris in 1968 in an effort to revive and redefine certain political and cultural ideas which had been discredited since 1945 as a result of their supposed association with the fascist movements of that era. The term ‘New Right’ was a moniker which Benoist and his colleagues never applied to themselves, believing that their thought lay outside the traditional categories of what constitutes ‘Left’ and ‘Right’, although they have since come to grudgingly accept it. Benoist, and the then editor of Éléments, one of GRECE’s periodicals, Charles Champetier, collaborated on this work in an effort to assess and summarize the first 30 years in the development of GRECE’s thought, as well as to provide some guidance for its future direction at the dawn of the new millennium. It remains the only attempt by GRECE to date to outline the fundamental components of its philosophy. Since 1968 and continuing to the present day, GRECE’s influence has spread throughout Europe and across the world. Readers who wish to learn more about the ideas and history of the European New Right are urged to consult Tomislav Sunic’s Against Democracy and Equality: The European New Right (London: Arktos, 2011) and Michael O’Meara’s New Culture, New Right: Anti- Liberalism in Postmodern Europe (Bloomington: 1stBooks, 2004). JOHN B. MORGAN IV Bangalore, India, May 2012. ...