De Montréal Bernard - Beyond The Mind 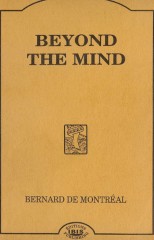 "The mind is a light continuum that connects the brain to the point of origin of the thought process in dimensions that broke away {rom the nuclear physical universe, before space began its expansion at the expense of light." "Pre-personal communication is the last and most ego-threatening psychic quantumjump required by the mind for the future evolution of human intelligence." "Interdimensional intelligence must be accessible to us if we are to understand the origins of thought." "The mind is not simply a personal experience but a communications network where unconscious telepathy takes place between worlds the existence of which is unknown to human science." "Supramental thought is man's link to the psychic universe of the mind." "Humanity as a race is a historical accumulation ofpsychological and psychic distortions developed through the domination of ideologies that distract the individual {rom himself." "We are not on earth to simply exist but to acquire a universal science of reality and apply it." ...