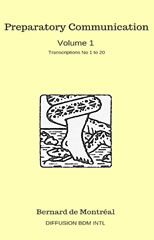 Bernard de Montréal. Bernard de Montréal was born in Quebec on July 26, 1939 and died on October 15, 2003, at the age of 64. He had an extraordinary life. He had an extraordinary experience in 1969 that he calledfusion with a systemic intelligence, therefore a telepathic mental connection with a light being located far into the galaxy. The kind of revelation that could leave more than one skeptic, but the illustration of his great intelligence to explain the current and future psychological condition of Man, has brought thousands of people over the 26 years that lasted his public career. The topics of his lectures were varied but also seem to have been steps. Having started essentially around the extraterrestrial phenomenon, he then went on to discuss esoterism and the decoding of prophecies, while warning about the fabulation and curiosity associated with these subjects. At the same time, he gave seminars to small groups, not because of an elitist approach, but rather to filter out individuals who could present psychological instability and thus damage his reputation. Having changed from interviewing when necessary, the lectures focused on very practical subjects such as couple psychology and the organization of material life, but did not put aside occult subjects related to the internal development of Man in relation to the invisible worlds. The peak of these studies has led to "evolutionary psychology" which we believe is the highest point out of his reading with his systemic telepathic intelligence. Diffusion BdM International is dedicated to making the work of this exceptional man known, so that they too may discover, at one level or another, a psychological awareness that leads to more peace, freedom, love and fulfilment. ...