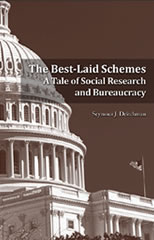 Author’s acknowledgements. My purpose for writing this book is to tell the story of a great experiment in social research in which I participated and whose events were important and instructive for American social science in the mid-1960s and later. I have attempted to limit what I have written to that which I experienced or observed, and to limit personal aspects of the narrative to those which are required to portray the context and the atmosphere of the events. It was necessary, nevertheless, to describe some of what others with whom I have had little contact experienced and expressed. Such descriptions cannot but be tempered by my own views. Thus, I am afraid the reader will find those views pervading everything, even though I have made a conscious attempt to minimize my intrusion. I regret any resulting distortion of “truth” that other participants may find, but at the same time I will defend opinions and conclusions expressly identified (and some that are implicit). In the interest of saving time and effort, I have taken some liberties with the usual practices of scholarship in annotating references and supporting material. Such annotation is given to support statements of fact that may be generally known or that may be controversial with two important exceptions. Official records, correspondence, or documents that are described and discussed can be presumed to exist, but I have not listed them as explicit references if they have not been published or otherwise made generally available. Newspaper articles identified in the text by source, author, and date did not seem to warrant the embellishment of formal citation. ...