Dennis Lawrence - The dynamics of war and revolution 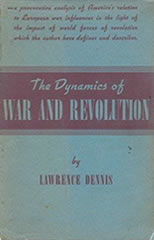 Author : Dennis Lawrence
Title : The dynamics of war and revolution A provocative analysis of America's relation to European war influences in the light of the impact of world forces of revolution which the author here defines and describes
Year : 1940

Introduction. This book needs an introduction to anticipate certain easy misconstructions of its major theses and, to set the reader straight from the start as to the author’s attitude and purposes. First, let it be said that I am undertaking to explain rather than to advocate the current decline and fall of capitalism and democracy; and the new revolution which is worldwide and just beginning in this country. I do not seek to show what can or should be done to save democracy and capitalism or to stop the new revolution. I am concerned only over what can and should be done for the best interests of the American people, not of a system, during developments which I consider inevitable and already in progress. Second, I argue that permanent social revolution is the only alternative to stagnation, pointing out that democracy, or capitalism on its economic side, was a great revolution and is fast becoming only a great legend. In so doing, I seek to explain the new revolution in various countries as a great and more or less inevitable process of social change the world over. I shall, therefore, probably be accused, though wrongly, of defending all revolutions and everything done in each one of them. I do not say that all revolutions are absolutely good. I say merely that any revolution that is big enough will end stagnation which is the essence of the social problem of today. Third, as to war, I hold it probable that nothing can keep America out and that our going to war will prove futile for the purposes for which we shall fight because, in going to war against the Have-nots, we shall be lighting a world revolution abroad only thereby to bring about here the same revolution which I consider inevitable everywhere. I am in favor of the revolution here but deem the war way of bringing it about regrettable though inevitable in the present emotional attitude of the American people toward world events. It will be easy to misunderstand or distort my position as to our going to war. It will seem to many that it is contradictory, at the same time, to disapprove of our entering the war, to approve of our going through with the new revolution and to say that we shall do so through entering the war. Obviously, from what I have to say, my personal preference would be to have the new revolution carried out here without our going to war in a futile effort to stop war abroad. What will be hard for many to understand about this book is that it is primarily my analysis of the situation and the near-future probabilities rather than a statement of my personal preferences. As I see no likelihood of my preferences being realized in the transition from capitalism to socialism, I do not devote a whole book to expounding them, as a detailed program, though I do not hesitate to express or suggest them from time to time in different connections. But my preferences are brought in only incidentally to the development of the book’s main theses which are largely interpretative of actual trends and probable events. ...