« Vidal Gore - Imperial America - Lilienthal Alfred M. - The other side of the coin »

Denton Sally - Morris Roger - The money and the power 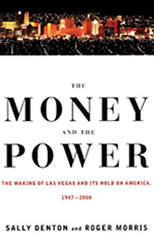 Prologue. First City of the Twenty-first Century. It is a soft, starlit night in mid-May 1998, the high desert bathed in a temperate spring darkness. Dressed in polo shirts and tailored slacks, the men stream out of the CasaBlanca casino and spa at Mesquite, Nevada, on the Utah border, one of them telling his usual lewd jokes, the others laughing, as they clamber into the three stretch limousines idling at the entrance. The group has spent the weekend as they expected, flying to the resort in chartered jets, relaxing around the pool, enjoying massages and facials, trying their luck at the tables. Over a lengthy dinner one of their hosts secretly calls the "Last Supper," they avidly discussed how to handle the latest half-billion dollars in drug proceeds already on hand. Waiters heard them cheering and shouting excitedly behind the closed doors of the private banquet room. ...

« Vidal Gore - Imperial America - Lilienthal Alfred M. - The other side of the coin »