Deunov Peter - In the beginning was 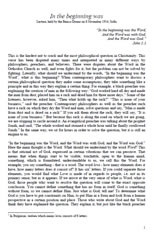 This is the hardest nut to crack and the most philosophical question in Christianity. This verse has been disputed many times and interpreted in many different ways by philosophers, preachers, and believers. There were disputes about the Word in the Orthodox Church as well, and even fights for it, but the problem can not be solved by fighting. Literally, what should we understand by the words, “In the beginning was the Word”, what is this beginning? When contemporary philosophers want to discuss a certain philosophical question they make some assumptions; they take something like a principle and in this way they explain a certain thing. For example, a black preacher was explaining the creation of man in the following way: “God worked hard all day and made the man from dust, placed him on a rack and dried him for three more days.” Some of the listeners, however, asked him, “Then what holds up the rack?” “This is none of your business,” said the preacher. Contemporary philosophers as well as the preacher each have a rack on which they dry the Word and man, solve questions and say, “Man is made from dust and is dried on a rack.” If you ask them about the rack, they will say, “It is none of your business.” But because this rack is along the road on which we are going, we are stopping to circle around it. An evangelical preacher was talking about the prophet Jonah, and said, “The whale worked and strained a whole hour until he finally swallowed Jonah.” In the same way, we sit for hours in order to solve the question, but it is still an enigma to us. “In the beginning was the Word, and the Word was with God, and the Word was God.” Here the main thought is the Word. What should we understand by the word Word? This is that rational act of God, expressed in certain vibrations that we can perceive. That means that when things start to be visible, touchable, open to the human mind, something, which is formulated, understandable to us, we call this the Word. For example, you say something - that is a word. The word love - how many elements does it have, how many letters does it consist of? It has six1 letters. If you could separate those elements, you would find what Love is made of in regards to people, i.e. not in its primary sense, but as it appears. If we arrive at the very sense of what is Word, what is God, those people who want to resolve the question will come to the exact opposite conclusion. You cannot define something that has no form in itself. God is something without form, so we cannot define Him. ...