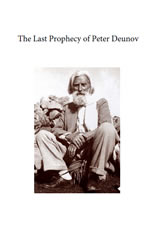 The prophecy of Peter Deunov regarding the end of our civilization and the beginning of the Golden Age on earth. Also known under the spiritual name of Beinsa Douno, the Bulgarian Master Peter Deunov (1864-1944) was a being of a very high level of consciousness, at the same time an incomparable musician, that gave during his whole life an example of purity, wisdom, intelligence and creativity. For years he was established close to Sofia where he lived surrounded by numerous disciples, he, by his radiance awakened the spirituality of thousands of souls in Bulgaria as well as the rest of Europe. Some days before his departure to the other world, he was in a profound mediumistic trance, he made an extraordinary prophecy in regards to our troubled epoch that we are crossing today, a prophecy about the "end of time" and the coming of a new Golden Age of humanity. Here is this deeply moving testament. It is current and so vibrant that one doubts that these words were spoken almost 60 years ago. "During the passage of time, the consciousness of man traversed a very long period of obscurity. This phase which the Hindus call "Kali Yuga", is on the verge of ending. We find ourselves today at the frontier between two epochs: that of Kali Yuga and that of the New Era that we are entering. A gradual improvement is already occurring in the thoughts, sentiments and acts of humans, but everybody will soon be subjugated to divine Fire, that will purify and prepare them in regards to the New Era. Thus man will raise himself to a superior degree of consciousness, indispensable to his entrance to the New Life. That is what one understands by "Ascension". Some decades will pass before this Fire will come, that will transform the world by bringing it a new moral. This immense wave comes from cosmic space and will inundate the entire earth. All those that attempt to oppose it will be carried off and transferred elsewhere. Although the inhabitants of this planet do not all find themselves at the same degree of evolution, the new wave will be felt by each one of us. And this transformation will not only touch the Earth, but the ensemble of the entire Cosmos. The best and only thing that man can do now is to turn towards God and improve himself consciously, to elevate his vibratory level, so as to find himself in harmony with the powerful wave that will soon submerge him. The Fire of which I speak, that accompanies the new conditions offered to our planet, will rejuvenate, purify, reconstruct everything: the matter will be refined, your hearts will be liberated from anguish, troubles, incertitude, and they will become luminous; everything will be improved, elevated; the thoughts, sentiments and negative acts will be consumed and destroyed. ...