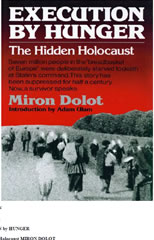 Author : Dolot Miron
Title : Execution by hunger The hidden holocaust Seven million people in the "breadbasket of Europe" were deliberately starved to death at Stalin's command. This story has been suppressed for half a century. Now, a survivor speaks.
Year : 1985