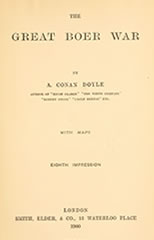 Preface. It is possible that a fuller knowledge may give an entirely different meaning to some of the events of the Boer war. This account is compiled with as much accuracy as is attainable at this date, and with as much detail as a single volume will permit. The occasional judgments and criticisms on which I have ventured may be founded upon error, but at least they are made without either fear or favour. In frequent conversations with Boers I have endeavoured to get their views upon both political and military questions. The book was begun in England and continued on board a steamer, but the greater part was written in a hospital tent in the intervals of duty during the epidemic at Bloemfontein. Often the only documents which I had to consult were the convalescent officers and men who were under our care. Under these circumstances some errors may have crept in, but on the other hand I have had the inestimable advantage of visiting the scene of this great drama, of meeting many of the chief actors in it, and of seeing with my own eyes something of the actual operations. ...