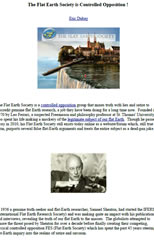 The Flat Earth Society is a controlled opposition group that mixes truth with lies and satire to discredit genuine flat Earth research, a job they have been doing for a long time now. Founded in 1970 by Leo Ferrari, a suspected Freemason and philosophy professor at St. Thomas' University, Leo spent his life making a mockery of the legitimate subject of our flat Earth. Though he passed away in 2010, his Flat Earth Society still exists today online as a website/forum which, still true to form, purports several false flat-Earth arguments and treats the entire subject as a dead-pan joke. In 1956 a genuine truth-seeker and flat-Earth researcher, Samuel Shenton, had started the IFERS (International Flat Earth Research Society) and was making quite an impact with his publications and interviews, revealing the truth of our flat Earth to the masses. The globalists attempted to ignore the threat posed by Shenton for over a decade before finally creating their competing, farcical controlled opposition FES (Flat Earth Society) which has spent the past 45 years steering all flat-Earth inquiry into the realms of satire and sarcasm. ...