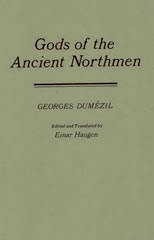 Georges Dumezil's conception of the fundamental structure of the common Indo- European ideology has been one of the most significant contributions to general knowledge yet made in this century. In the course of the last thirty years many scholars have been building upon Dumezril's pioneer research, and have materially facilitated the development of the model of ancient Indo-European culture. This model, according to Dumezil, was tripartite, representing 1. sovereignty: the principle of power, including order; 2. the implementation of power by force; and 3. the maintenance of physical wellbeing. Thus one finds a coordination of gods and social classes: Odin and Jupiter pair with the priesthood to represent sovereignty; Mars and Thor with the warrior caste represent force: the Dioscuri and Quirinus, with the herders and culturists, to represent welfare and fecundity. ...