Dunegan Lawrence - The new order of the barbarians 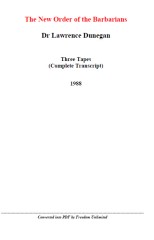 Tape 1. Is There a Power, A Force Or a Group of Men. Organising and Redirecting Change ? There has been much written, and much said, by some people who have looked at all the changes that have occurred in American society in the past 20 years or so, and who have looked retrospectively to earlier history of the United States, and indeed, of the world, and come to the conclusion that there is a conspiracy of sorts which influences, indeed controls, major historical events, not only in the United States, but around the world. This conspiratorial interpretation of history is based on people making observations from the outside, gathering evidence and coming to the conclusion that from the outside they see a conspiracy. Their evidence and conclusions are based on evidence gathered in retrospect. Period. I want to now describe what I heard from a speaker in 1969 which in several weeks will be 20 years ago. The speaker did not speak in terms of retrospect, but rather predicting changes that would be brought about in the future. The speaker was not looking from the outside in, thinking that he saw conspiracy, rather, he was on the inside, admitting that, indeed, there was an organized power, force, group of men, who wielded enough influence to determine major events involving countries around the world. And he predicted, or rather expounded on, changes that were planned for the remainder of this century. As you listen, if you can recall the situation, at least in the United States in 1969 and the few years thereafter, and then recall the kinds of changes which have occurred between then and now, almost 20 years later, I believe you will be impressed with the degree to which the things that were planned to be brought about have already been accomplished. Some of the things that were discussed were not intended to be accomplished yet by 1988. (Ed. Note: the year Dr. Dunegan made this tape) but are intended to be accomplished before the end of this century. There is a timetable; and it was during this session that some of the elements of the timetable were brought out. Anyone who recalls early in the days of the Kennedy Presidency... the Kennedy campaign... when he spoke of "progress in the decade of the ‘60s"; that was kind of a cliché in those days - "the decade of the ‘60s." Well, by 1969 our speaker was talking about the decade of the ‘70s, the decade of the ‘80s, and the decade of the ‘90s. So that... I think that terminology that we are looking at... looking at things and expressing things, probably all comes from the same source. Prior to that time I don't remember anybody saying "the decade of the ‘40s and the decade of the ‘50s. ...