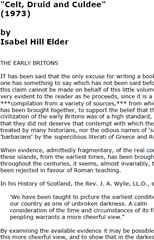 The early britons. It has been said that the only excuse for writing a book is that one has something to say which has not been said before. That this claim cannot be made on behalf of this little volume will be very evident to the reader as he proceeds, since it is a compilation from a variety of sources, from which evidence has been brought together, to support the belief that the civilization of the early Britons was of a high standard, and that they did not deserve that contempt with which they have been treated by many historians, nor the odious names of 'savages' and 'barbarians' by the supercilious literati of Greece and Rome. When evidence, admittedly fragmentary, of the real conditions in these islands, from the earliest times, has been brought to light throughout the centuries, it seems, almost invariably, to have been rejected in favour of Roman teaching. ...