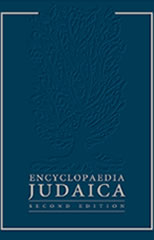 Preface to the second edition. In the past thirty-five years the Encyclopaedia Judaica has come to occupy a rarefied space in the world of Jewish learning. Authoritative, comprehensive, serious yet accessible, it graced the library shelves of scholars and rabbis, of the learned and the studious, and even of the would-be studious, consulted by the curious and the inquisitive, an important starting point for a journey of learning. It also was that rare work in Jewish life and learning that covered controversy and yet was not controversial. It could not be identified with one school of thought, with one religious, political, or social perspective. Written by Zionists who believed ardently in Jewish peoplehood and the centrality of the land of Israel and the renascent State of Israel for the Jewish future, it also respected the many forms that Jewish life had taken. It performed its task admirably, sharing with the reader what was known and knowable in 1972, the year when it was first published. For a time through Year Books and Decennial volumes, it sought to update its readers on more recent learning, trends, and issues, and for the first time in 1997 it migrated to an electronic version with a wonderful search engine that freed the reader from taking volumes off the shelf and moving from the index to yet another volume. So we understood as we embarked upon the task of updating the masterful work that much could be lost. We were also confident of what could be gained. Why a new edition ? The answer is quite simple. Knowledge is dynamic, not static. Much has changed in the last thirty-five years. ...