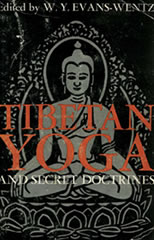 Seven authentic Tibetan yoga texts, almost unknown to the occidental world until their first publication in English in 1935, are now available in this Galaxy Book edition. A companion to the unique Tibetan Book of the Dead (GB 39), which the late Dr. Evans-Wentz also edited, this volume, illustrated with photographs and reproductions of yoga paintings and manuscripts, contains some of the principal meditations used by illustrious Hindu and Tibetan gurus and philosophers through the ages in attaining Right Knowledge and Enlightenment. The editor, whose inquiry and research extended through more .than fifteen years in the Orient, spent much time as a pupil of Hindu sages and Buddhist lamas. He has included a body of orally transmitted tradition and teachings received at first hand. These will be of particular interest to anthropologists and psychologists, and to students of comparative religion and practically applied Mahayana Yoga. Special commentaries precede each carefully rendered text, and a comprehensive preface contrasts the tenets of Buddhism with European concepts of religion, philosophy, and science. Yoga, the tap root of Hinduism, Jainism, Zen Buddhism, and Taoism, has also influenced the development of Judaism, Islam and Christianity. These seven distinct but intimately related books, arranged in orderly sequence, afford a comprehensive view of the spiritual teachings which have shaped the culture of the Orient, and which are now increasingly enriching the West's appreciation of the depths of the human psyche. The late W. Y. Evans-Wentz, formerly of Jesus College, Oxford, is also the editor of The Tibetan Book of the Dead (GB 39), The Tibetan Book of the Great Liberation (GB 260), and Tibet's Great Yogi, Milarepa (GB 294). His substantial tetralogy of works on yoga, based on translations from the Tibetan, offers an "interpretation from within" rarely found in the works of Western scholars. During the early years of this century Dr. Evans-Wentz lived in India and in Sikkim, at the invitation at the Maharaja Sidkyong Tulku, where he studied occult doctrines intensively. ...