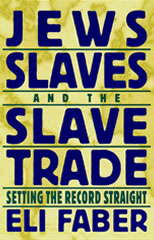 Introduction. In recent years interest regarding the extent to which Jews participated in the institution of slavery in the Americas has stemmed from allegations that they predominated in the slave trade and that they owned slaves well in excess of their proportion among the white population. This study argues that they did neither. To the contrary, their participation in the slave trade and in the ownership of slaves was quite small. When compared with their non-Jewish contemporaries, their involvement was one that had little impact. Despite assiduous efforts by historians since Philip D. Curtin published his seminal study of the size of the slave trade in 1969, we shall probably never know, in all its grim and cruel enormity, how many men, women, and children on the continent of Africa were trapped in the net of the Atlantic slave trade. Wrenched from their homes and their families, marched in chains to the coasts and transported across the seas during an era that lasted well over three centuries, millions were condemned to spend the remainder of their lives in servitude and to witness the enslavement of their children. Many more did not survive the Atlantic crossing, perishing instead on vessels swept by disease or from a profound depression that the historical record tells us frequently seized many of the captives in its grip. Still others died within a few years of arrival, toiling on the plantations and in the mines of Europe’s colonies in the western hemisphere. ...