Faye Guillaume - Why we fight 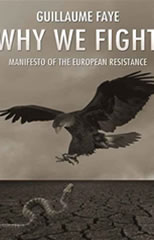 Author : Faye Guillaume
Title : Why we fight Manifesto of the European Resistance
Year : 2001

Translator's foreword : prophet of the fourth age. ‘L’histoire est la réalization d’idées irréalisables.’ - Guillaume Faye re these the last days of Europe ? There’s no hyperbole here. If major changes are not soon forthcoming, her peoples face the extinction of their civilisation and their kind. Already she is overrun by millions of alien, mainly Islamic colonisers from the Global South, who have begun to replace her native peoples and supplant her order; she is subject to an American overlord whose world system requires her de-Europeanisation and ‘globalisation’; she is misgoverned by technocrats, career politicians, and plutocratic elites indifferent to her blood and spirit. And to all this (to which much could be added), her defenders - those who sense the danger and strive to resist it - are disunited, at times even unaware of who or what exactly they are fighting. Within a generation, ‘Europe’ may go the way of Ancient Sumer or the Incas. Guillaume Faye - the one-time enfant terrible of France’s Nouvelle Droite - believes ‘the European Resistance’ has the resources and energies to defeat the Continent’s enemies, if its various elements and tendencies should form a united front around clear ideas and a common ideology. That is, if her defenders would agree to concentrate their forces. His manifesto, and especially its metapolitical dictionary, aspire to lay the metapolitical foundations for such a unification - by designating and defining the key ideas and ideology that will make it possible. ...