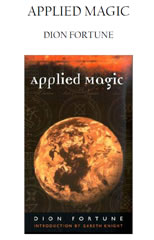 The Occult Way. The Mystic Way that leads to Divine Union is so well known that it is often forgotten that there is another Path, seemingly totally different in route that leads in the end to the same goal. We are so accustomed to hear the renunciation of the world and the abnegation of the self set up as the only true Path of the sould which seeks the Highest, that we hardly dare whisper that there may be another Path - the Path of the mastery of manifested existence and the apotheosis of the self. There are two ways in which God can be worshipped; we can worship Him in unmanifested Essence, or we can worship Him in His manifested form. Both ways are legitimate, provided that in worshipping the manifested form we do not forget the Essence, and in worshipping the Essence we do not confuse it with the manifested form, for these things are the sin of idolatry, which consists in a wrongly-placed emphasis. The mystic seeks to worship God in essence But the essence or root of God, being unmanifest, eludes human consciousness. The mystic, then, in order to conceive the object of his worship, has to transcend normal human consciousness. It is not possible to know the inmost nature of a state of existence unless we can enter into it and share, in some measure at least, its experience The Mystic, then, has for his task the freeing of his consciousness from its habitual bondage to form. It is to this end that the ascetic discipline is directed, killing out the lower in order that the higher may be set free to unite with God and thereby know Him. The Way of the Mystic is a way of renunciation till he breaks all the limitations of his lower nature and enters into his freedom; nothing then remains that can withhold him from God, and his soul flies upwards to enter the Light and return not again. ...