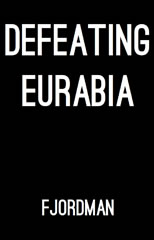 The Eurabia Code. This essay was originally published in several parts at the website Jihad Watch in October 2006, and then republished as one essay at the Gates of Vienna blog. “That such an unnecessary and irrational superstate was ever embarked on will seem in future years to be perhaps the greatest folly of the modern era.” - Margaret Thatcher, former British Prime Minister. “A nation can survive its fools, and even the ambitious. But it cannot survive treason from within. An enemy at the gates is less formidable, for he is known and carries his banner openly. But the traitor moves amongst those within the gate freely, his sly whispers rustling through all the alleys, heard in the very halls of government itself. For the traitor appears not a traitor; he speaks in accents familiar to his victims, and he wears their face and their arguments, he appeals to the baseness that lies deep in the hearts of all men. He rots the soul of a nation, he works secretly and unknown in the night to undermine the pillars of the city, he infects the body politic so that it can no longer resist. A murderer is less to fear. The traitor is the plague.” - Cicero, Roman statesman and lawyer. I decided to write this essay after a comment from a journalist, not a Leftist by my country’s standards, who dismissed Eurabia as merely a conspiracy theory, one on a par with The Protocols of the Elders of Zion. I do not disagree with the fact that conspiracy theories exist, nor that they can be dangerous. ...