« Chernikov A. A. - Hydrological cycle Volume 2 - House of Commons Science and Technology Committee » 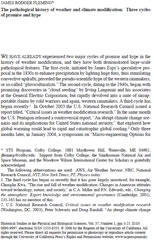 We have already experienced two major cycles of promise and hype in the history of weather modification, and they have both demonstrated large-scale pathological features. The first cycle, initiated by James Espyʼs speculative proposal in the 1830s to enhance precipitation by lighting huge fires, thus stimulating convective updrafts, preceded the pseudo-scientific hype of the western rainmakers, or so-called “pluviculturalists.” The second cycle, dating to the 1940s, began with promising discoveries in “cloud seeding” by Irving Langmuir and his associates at the General Electric Corporation, but rapidly devolved into a suite of unsupportable claims by cold warriors and again, western rainmakers. A third cycle has begun recently.1 In October 2003 the U.S. National Research Council issued a report titled, “Critical issues in weather modification research.” In the same month the U.S. Pentagon released a controversial report, “An abrupt climate change scenario and its implications for United States national security,” that explored how global warming could lead to rapid and catastrophic global cooling.2 Only three months later, in January 2004, a symposium on “Macro-engineering Options for Climate Change Management and Mitigation” was held in Cambridge, England under the joint sponsorship of the Tyndall Centre for Climate Change Research and the business-oriented Cambridge-MIT Institute.3 The NRC study cited looming social and environmental challenges such as water shortages and drought, property damage and loss of life from severe storms, and the threat of “inadvertent” climate change as justifications for new national and international initiatives in weather modification research. On a grander, planetary scale, the authors of the DoD report recommended that the government should “explore geo-engineering options that control the climate,” while the Tyndall Centre symposium set out to “identify, debate, and evaluate” possible, but highly controversial options for the design and construction of engineering projects for the management and mitigation of global climate change. These policy initiatives were surrounded by a modicum of promise and an excess of hype, but none had adequate recourse to historical analysis. In November 2006 I participated in a conference sponsored by the NASA-Ames and the Carnegie Institution on “Managing Solar Radiation,” one of the many euphemisms for geoengineering. I was the sole historian. This paper brings the checkered history of weather modification to bear on these very recent initiatives and asks, are we at the start of a third cycle - this time involving both weather and climate modification ? ...

« Chernikov A. A. - Hydrological cycle Volume 2 - House of Commons Science and Technology Committee »