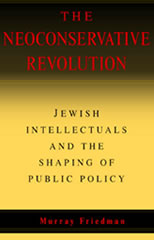 This book, which will come as a surprise to many educated observers and historians, suggests that Jews and Jewish intellectuals have played a considerable role in the development and shaping of modern American conservatism. The focus is on the rise of a group of Jewish intellectuals and activists known as neoconservatives, who began to impact on American public policy during the ColdWar with the Soviet Union and, most recently, were influential in the lead-up to the invasion of Iraq. It presents a portrait of the life and work of the original small group of neocons, including Irving Kristol, Norman Podhoretz, and Sidney Hook. This group has grown into a new generation who operate as columnists; in conservative think tanks such as the Heritage Foundation and the American Enterprise Institute; at colleges and universities; and in government in the second Bush administration, including such lightning-rod figures as Paul D.Wolfowitz, Richard Perle, Douglas Feith, and Elliott Abrams. The book proposes that the neocons have been so significant in reshaping modern American conservatism and public policy that they constitute a neoconservative revolution, as the book’s title suggests. Historian, social activist, and a prolific writer, Murray Friedman was appointed as vice chair of the U.S. Civil Rights Commission inWashington, D.C., by President Ronald Reagan and as acting chair following the death of the chairman. He was honored in 2005 by Temple University, which announced the creation of the Murray Friedman Chair in American Jewish History. In 2003, he served in a State Department delegation representing the United States inVienna at a conference on racism, xenophobia, and discrimination. Dr. Friedman has written and edited numerous books, including What Went Wrong? The Creation and Collapse of the Black Jewish Alliance (1995), several volumes on Philadelphia Jewish history, and The Utopian Dilemma: American Jews and Public Policy. In addition, he has written articles in Commentary, Atlantic Monthly, The Weekly Standard, and The New Republic as well as in professional journals such as American Jewish History. ...