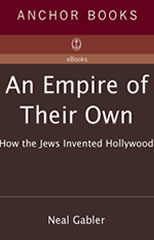 Author : Gabler Neal
Title : An empire of their own How the jews invented Hollywood
Year : 1989

Introduction. Russian-Jewish immigrants came from the shtetls and ghettos out to Hollywood... In this magical place that had no relationship to any reality they had ever seen before in their lives, or that anyone else had ever seen, they decided to create their idea of an eastern aristocracy... The American Dream - is a Jewish invention. JILL ROBINSON. They (the Jews of Hollywood) not only believed in the American Dream, rather than see it fail, they tried desperately and successfully to manufacture the evidence for its survival... and for its existence. HY KRAFT, SCREENWRITER. THIS BOOK BEGINS, AS HOLLYWOOD itself did, with something of a paradox. The paradox is that the American film industry, which Will Hays, president of the original Motion Picture Producers and Distributors of America, called “the quintessence of what we mean by ‘America,’ ” was founded and for more than thirty years operated by Eastern European Jews who themselves seemed to be anything but the quintessence of America. The much-vaunted “studio system,” which provided a prodigious supply of films during the movies’ heyday, was supervised by a second generation of Jews, many of whom also regarded themselves as marginal men trying to punch into the American mainstream. The storefront theaters of the late teens were transformed into the movie palaces of the twenties by Jewish exhibitors. And when sound movies commandeered the industry, Hollywood was invaded by a battalion of Jewish writers, mostly from the East. The most powerful talent agencies were run by Jews. Jewish lawyers transacted most of the industry’s business and Jewish doctors ministered to the industry’s sick. Above all, Jews produced the movies. “Of 85 names engaged in production,” a 1936 study noted, “53 are Jews. And the Jewish advantage holds in prestige as well as numbers.” ...