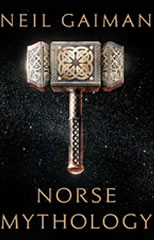 An introduct. It’s as hard to have a favorite sequence of myths as it is to have a favorite style of cooking (some nights you might want Thai food, some nights sushi, other nights you crave the plain home cooking you grew up on). But if I had to declare a favorite, it would probably be for the Norse myths. My first encounter with Asgard and its inhabitants was as a small boy, no more than seven, reading the adventures of the Mighty Thor as depicted by American comics artist Jack Kirby, in stories plotted by Kirby and Stan Lee and dialogued by Stan Lee’s brother, Larry Lieber. Kirby’s Thor was powerful and good-looking, his Asgard a towering science fictional city of imposing buildings and dangerous edifices, his Odin wise and noble, his Loki a sardonic hornhelmeted creature of pure mischief. I loved Kirby’s blond hammer-wielding Thor, and I wanted to learn more about him. ...