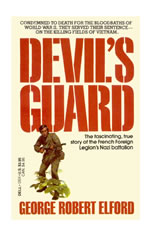 In 1954 the French were trying to fight the Viet Minh with armored convoys and isolated garrisons. But "the war against guerrillas," says the man who calls himself Hans JosefWagemueller, "is not a war of airplanes and tanks. It is a war of wits." And, as fought by "Wagemueller" and his comrades in the French Foreign Legion's Nazi battalion, it was also a war of terror. It was a war in which bamboo land mines were countered by booby traps that combined Teutonic precision with primal bloodlust. A war where one side fought with children and the other slaughtered them. A war where every soldier - German, French, or Vietnamese - prayed to die without torture... and to be buried with his body in one piece. ...