« Fort Charles - The book of the damned - Les rats maudits » 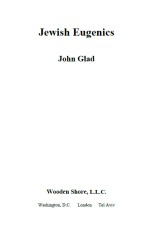 Dedicated to the memory of those Jewish and non-Jewish eugenicists who were defamed and persecuted in the Western world, some of whom had earlier been driven into exile from Hitler’s Germany, even as others of their colleagues perished; in homage to both eugenicists and their opponents who were victimized, imprisoned, and murdered under Communist rule; in acknowledgement of today’s eugenicists – again both Jewish and non-Jewish – who continue their struggle to defend the genetic patrimony of future generations; and in respect for those scholars and scientists who may disagree with them but who share their selfless concern for the future of humanity. ...

« Fort Charles - The book of the damned - Les rats maudits »