Glubb John - The fate of empires and Search for survival 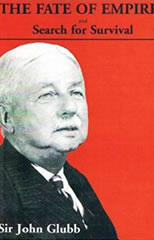 John Bagot Glubb was born in 1897, his father being a regular officer in the Royal Engineers. At the age of four he left England for Mauritius, where his father was posted for a three-year tour of duty. At the age of ten he was sent to school for a year in Switzerland. These youthful travels may have opened his mind to the outside world at an early age. He entered the Royal Military Academy at Woolwich in September 1914, and was commissioned in the Royal Engineers in April 1915. He served throughout the first World War in France and Belgium, being wounded three times and awarded the Military Cross. In 1920 he volunteered for service in Iraq, as a regular officer, but in 1926 resigned his commission and accepted an administrative post under the Iraq Government. In 1930, however, he signed a contract to serve the Transjordan Government (now Jordan). From 1939 to 1956 he commanded the famous Jordan Arab Legion, which was in reality the Jordan Army. Since his retirement he has published seventeen books, chiefly on the Middle East, and has lectured widely in Britain, the United States and Europe. ...