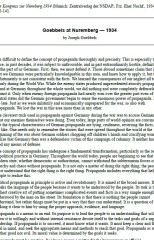 It is difficult to define the concept of propaganda thoroughly and precisely. This is especially true since, in past decades, it was subject to unfavorable, and in part extraordinarily hostile, definitions, on the part of us Germans. First, then, we must defend it. Those abroad sometimes claim that in the past we Germans were particularly knowledgeable in this area, and knew how to apply it, but that unfortunately is not consistent with the facts. We learned the consequences of our neglect all too clearly during the World War. While the enemy states produced unprecedented atrocity propaganda aimed at Germany throughout the whole world, we did nothing and were completely defenseless against it. Only when enemy foreign propaganda had nearly won over the greater part even of the neutral states did the German government begin to sense the enormous power of propaganda. It was too late. Just as we were militarily and economically unprepared for the war, so also with propaganda. We lost the war in this area more than in any other. The cleverest trick used in propaganda against Germany during the war was to accuse Germany of what our enemies themselves were doing. Even today, large parts of world opinion are convinced that the typical characteristics of German propaganda are lying, crudeness, reversing the facts, and the like. One needs only to remember the stories that were spread throughout the world at the beginning of the war about German soldiers chopping off children’s hands and crucifying women to realize that Germany then was a defenseless victim of this campaign of calumny. It neither had nor used any means of defense. The concept of propaganda has undergone a fundamental transformation, particularly as the result of political practice in Germany. Throughout the world today, people are beginning to see that a modern state, whether democratic or authoritarian, cannot withstand the subterranean forces of anarchy and chaos without propaganda. It is not only a matter of doing the right thing; the people must understand that the right thing is the right thing. Propaganda includes everything that helps the people to realize this. Political propaganda in principle is active and revolutionary. It is aimed at the broad masses. It speaks the language of the people because it wants to be understood by the people. Its task is the highest creative art of putting sometimes complicated events and facts in a way simple enough to be understood by the man on the street. Its foundation is that there is nothing the people cannot understand, but rather things must be put in a way that they can understand. It is a question of making it clear to him by using the proper approach, evidence, and language. Propaganda is a means to an end. Its purpose is to lead the people to an understanding that will allow it to willingly and without internal resistance devote itself to the tasks and goals of a superior leadership. If propaganda is to succeed, it must know what it wants. It must keep a clear and firm goal in mind, and seek the appropriate means and methods to reach that goal. Propaganda as such is neither good nor evil. Its moral value is determined by the goals it seeks. ...