« Goebbels Joseph - Goebbels at Nuremberg - Hitler Adolf - Why we are antisemites » 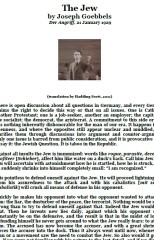 There is open discussion about all questions in Germany, and every German claims the right to decide this way or that on all issues. One is Catholic, another Protestant; one is a job-seeker, another an employer; the capitalist, the socialist; the democrat, the aristocrat. A commitment to this side or that has nothing inherently dishonorable for the man of our era. It happens in all openness, and where the opposites still appear unclear and muddled, one clarifies them through discussions into argument and counter-argument. Only one issue is barred from public consideration, and it is provocative even to say it: the Jewish Question. It is taboo in the Republic. Against all insults the Jew is immunized: words like rogue, parasite, deceiver, profiteer (Schieber), affect him like water on a duck's back. Call him Jew, and you will ascertain with astonishment how he is startled, how he is struck, how he suddenly shrinks into himself completely small: "I am recognized." It is pointless to defend oneself against the Jew. He will proceed lightning-fast from his assuredness to the attack and with his cabalistics (mit seiner Kabalistik) will crush all means of defense in his opponent. Quickly he makes his opponent into what the opponent wanted to attack in him: the liar, the dusturber of the peace, the terrorist. Nothing would be more wrong than to try to defend oneself against that. Indeed the Jew would like that. Then he invents new lies daily, against which his opponent must constantly be on the defensive, and the result is that in the midst of loudly defending himself he never gets around to what the Jew really fears: to attack him. The accused has now become the accuser, and with a great shriek he forces the accuser into the dock. Thus it always went until now, whenever a man or a movement saw the need to combat the Jew. So also would it go for us, if we were not familiar with his nature to the last detail, and if we did not have the courage to derive our radical conclusions from this awareness. And they are : 1. One cannot combat the Jew positively. He is a negative, and this negative must be erased from the German equation, or it will always spoil the equation. 2. One cannot discuss the Jewish Question with the Jew. Indeed one cannot prove to anybody that one has the right and the duty to render him harmless. 3. One ought not to afford to the Jew in the struggle the means that one affords to every honest opponent; for he is not an honest opponent; he will merely exploit magnanimity and chivalry to place his enemy at a disadvantage. 4. The Jew has no say in German questions. He is a foreigner, an alien to our folk, who enjoys only the right of a guest, and indeed without exception abuses that. 5. The so-called religious morality of the Jew is not a morality but a guide to deception. Therefore it has no claim to the defense and protection of the law. 6. The Jew is not more intelligent than we, but only more sophisticated and cunning. His system cannot be broken economically - for indeed he fights economically under completely different moral laws than we - but only politically. 7. A Jew cannot attack the reputation of a German. Jewish smears are only badges of honor for a German who opposes the Jews. 8. The value of a German man or of a German movement rises with the opposition of the Jew. If anyone is fought by the Jew, it absolutely vouches for him. Whoever is not persecuted by the Jew or indeed is praised by him is useless and harmful. 9. The Jew assesses German issues always from the Jewish perspective. Usually therefore the opposite of whatever he says is correct. 10. One must say yes or no to anti-Semitism. Whoever aids the Jew sins against his own people. One can be either a servant of the Jew or an opponent of the Jew. Opposition to the Jew is a matter of personal cleanliness. With these principles the movement to oppose the Jew has a prospect of success. And therefore such a movement for the first time is taken seriously and feared by the Jew. That he makes a lot of noise and objects to it, is only a proof that it is correct. We are happy to find the appropriate certification immediately in these lines in the Jewish gazettes. Let them scream terror there. To that we answer with the famous utterance of Mussolini: "Terror? Never! It is social hygiene. We are taking these individuals out of circulation, as a physician takes a bacillus out of the body's circulation." ...

« Goebbels Joseph - Goebbels at Nuremberg - Hitler Adolf - Why we are antisemites »