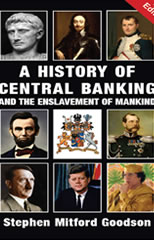 Author : Goodson Stephen Mitford
Title : A history of central banking and the enslavement of mankind
Year : 2014

Foreword. This book is bound to be controversial and engender strong reactions, and I do not endorse all of the viewpoints expressed therein. Why would a seemingly arid subject matter such as the history of central banking and of the monetary system give rise to such strong reactions? One must wonder why some will attach to this book the stigma of heresy, and argue that Stephen Goodson has gone beyond the parameters of acceptable historical debate. Goodson has the credentials and track-record to make a credible presentation of a subject matter which he has researched for decades and which he has lived personally as a non-executive Director of the South African Reserve Bank. I do not have the expertise to say whether Goodson’s findings are accurate, but I do know that the raw nerves he touches are on account of central banking and the monetary system created thereunder being at the core of the persistent profound and inhumane differences in wealth distribution within any given country, and among countries. For this reason, for several years, my Party and I have argued that South Africa should reform its central banking and monetary system, even if that means placing our country out of step with iniquitous world standards. Books on economics and banking are generally viewed as being abstruse, whose readers are confined mainly to academia and the business world. In this case we have a notable exception. This work provides not only a broad sweep of the history of economics over almost three millennia, but insights into how the problems of usury have been confounding and enslaving mankind since its civilized existence first began. It may shock some to realise that central banks throughout the world, including our own South African Reserve Bank, do not serve our own best interests and are in fact in league with private banks. This not only undermines our sovereignty, but deprives us of the means of having publicly-issued debt-free money which belongs to the people as its sovereign debt, and interest-free means of exchange. Instead, in our country, as in other countries, we use private money produced out of debt by the private banking system. Shifting from bank-notes to government-notes would provide our people with a decent life, which is blessed, prosperous and sustainable. But such a simple reform would be a real revolution, more difficult to bring about than any other reform or social change imaginable. ...