Gordon-Canning Robert - The inward strength of a national socialist 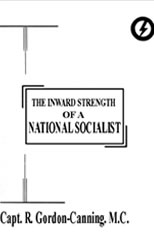 The British Union, in order not only to waken, but to keep alive the emotions and enthusiasm of the British people, must affirm continually both its mystic and militant elements. For while Conservative and Labour leaders concentrate upon a hypocritical, sectional and purely party political appeal to the British public, thus dividing the people, British Union accentuates the spiritual approach to life as well as the aspects of its economic reconstruction which unites and not antagonises the various sections, industrial, commercial, agricultural, &c., of British life. For both these elements, mystic and militant, are devoted to the attainment of Union and both of which have been employed by the great world religions of Christ and Mohammed. The Jews have never been mystic, and the Buddhists have never been militant. Thus, in these decadent and materialistic days of British history, when the Church has lost a considerable part of its prestige by the actions of its clergy, in many cases either sycophants of the rich or adherents to the soul-destroying gospel of Bolshevism, it remains for the mystical urge inherent in National Socialism to revitalise, to respiritualise, the daily life and thought of the people. The speeches and resolutions reported in the press which took place at the Assembly of Free Church Council this year show how small is the understanding among a large body of Christian Churchmen of National Socialist and Fascist principles. Indeed, these prove how the representatives of these denominations have fallen under the spell of propaganda issued by the inveterate foe of Christianity, and how they themselves have become allies of atheists and herders of the people into the byres of international finance. In these days, when the materialistic aspect of life outweighs its spiritual significance and when at the great Christian festivals the churches are but poorly attended, as the call issuing from them is so weak and uninspiring, it is for the voice of National Socialism with its militant and mystic forces to unseal the ears and unveil the eyes of the British people, until the basic principles of religion return to their hearts—service and love; the militant service and the mystical love, from which there is no material and selfish reward, but only an inward light of infinite radiance. The life of a National Socialist should be like that of the perfect knight, Sir Philip Sidney, of Christian chivalry, or of Sala-ud-din the Muslim paladin. And it is on these lines that National Socialism and the Church should co-operate and advance together in the national life, Render unto Caesar the things that are Caesar's, and unto God the things that are God's. ...