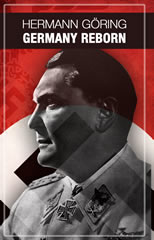 Link download : Goring_Hermann_-_Germany_reborn.zip
Buy the paper version of the book

Introduction: At the time Third Reich German Nazi leader Hermann Göring wrote the following manuscript, he was still a general. Later, Hermann Göring became a Reichsmarschall (Reich Marshal). In World One War, Hermann Göring took over command of von Richthofen's squadron after the Red Baron was shot down. Soon after the war Hermann Göring became a follower of Adolf Hitler. After the failed "Putsch", he fled to Sweden and got married. For a while he stayed in Italy, but the ruling fascists had little to gain from helping the then banned NSDAP. But when Hitler was released from Spandau prison, Hermann Göring was soon at his side again. Hermann Göring was intensely involved in the political fraction negotiations. Late in the Weimar Republik Hermann Göring even become President of the Reichstag. After the NSDAP took power, Hermann Göring became Minister President of Prussia. Hermann Göring's re-organization of the Prussian police is described in the manuscript on this page. Already a top Nazi leader, Hermann Göring became a top level Third Reich leader well, both in politics and as head of the new and rapidly expanding Luftwaffe - which eventually even had its own tank formation, the Hermann Göring Panzer Division! When Hermann Göring re-married (his first wife had died), the wedding was one of the biggest social events in the Third Reich. When the Second War World broke out, Germany had the best - but not the largest - air force in the world. It lost this lead during the war, but near the end regained it with the ME262 jet. Many experts believe Germany might have won the war, if it could have held out another six months, ie enough time to build ENOUGH jets to turn the tide in the air. Hermann Göring had received a very painful wound in the groin. This medication eventually led to a drug addiction, which in turn had a negative effect on his work. Hermann Göring liked to be generous to his friends, for which he has been criticized. Despite Hermann Göring's shortcomings, Hitler remained loyal to his friend and comrade until very late in the war when Hermann Göring attempted to negotiate peace with the west without Hitler's permission. At Nuremberg Field Marshal Hermann Göring put up a spirited fight. In the end, Hermann Göring defied the enemy's desire to hang him by claiming suicide. General Hermann Göring, Berlin, February 1934: I welcome this opportunity of presenting to the English-speaking peoples a few of my ideas about the struggle of the German people for freedom and honour. I hope that these words will also be accepted by our opponents as a frank expression of my boundless love for my country, to whose service alone I have pledged my whole life. ...