Greene Liz - Sasportas Howard - The development of the personality 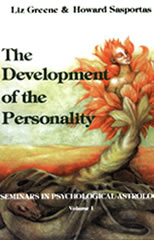 Introduction. There was a time, not so very long ago, when an astrological consultation was something people sought because they wanted predictions about the future-money, love, health-and, if there was any “character analysis” involved at all, it consisted primarily of the astrological “cookbook” kind: You are a Gemini and therefore you are clever, versatile and articulate. This listing of static personality traits was either already well known to the client, in which case there was not a great deal of value to be gained from such a reading; or the client could not immediately identify with the character traits described, in which case the validity of astrology itself was consequently held in question. Naturally there are still many people who go to an astrologer for these reasons-predictions and a pat on the back about one’s apparently fixed and unalterable behaviour -and there are still many astrologers who will happily oblige such clients by providing the information requested. But over the years, particularly the last five years, there has been a gradual change not only in the reasons why people seek out astrologers, but also in the kind of people who seek them out; and the astrological community has in turn met this challenge and has begun to formulate a different and much more creative kind of astrology, built firmly upon tradition but adapted to the changing and more sophisticated needs of the client. There was a time, not so very long ago, when an astrologer’s clientele was fairly predictable-a fair number of show business people, notoriously “superstitious” anyway, and a smattering of upwardly spiritually mobile aspirants hoping for a formula for enlightenment without mess. This, too, has been changing. Now the astrologer’s client may be anybody at all, from a government minister to a secretary, from a doctor to an artist, from a computer programmer to a fashion model. ...