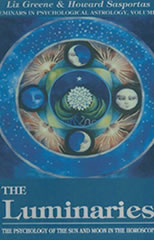 Authors : Greene Liz - Sasportas Howard
Title : The luminaries The psychology of the sun and moon in the horoscope
Year : 1992

Introduction. The word luminary, according to the Chambers Twentieth Century Dictionary, means, very simply, a source of light. It also describes “one who illustrates any subject or instructs mankind.” Thus a luminary in the world of literature or the theatre is someone with a great talent-an actor like Laurence Olivier or a writer like Thomas Mann-who through his or her excellence defines the standard toward which we aspire. A luminary is one who sets an example, embodying the best of what might be achieved. In an earlier and more poetic astrology, the Sun and Moon were called the Luminaries-or, alternatively, the Lights. What are these luminaries, these exemplary “instructors” within us which define in their separate domains the internal standard toward which we aspire as individuals ? In the past, astrology has interpreted planetary placements as a kind of immovable given-the way we are made. The Sun and Moon are therefore said to represent essential characteristics which irrevocably define the individual personality. But any astrological factor is also a process, for when the human being is seen through the lens of psychological insight, he or she is not static, but moves through life in an unending process of change and development. An astrological placement describes an arrow which points somewhere, a creative energy which gradually layers flesh onto the bare bones of archetypal patterning, an intelligent movement which, over time, fills in the stark black-and-white outlines of the essential life-myth with the subtle colours of experience and individual choice. The luminaries in the horoscope are truly instructors, reflecting what we could one day become, portraying in symbolic form the best of what might be achieved. ...