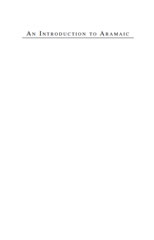 Preface. This book is intended for students who are just beginning to study Aramaic. Seldom is it the language’s inherent value which attracts such individuals; more often, they are motivated (if not always directly) by an interest in the Bible, although some may want to explore early Judaism or Christianity as well. This fact has several fairly obvious corollaries for a book such as this. First, it means that those using it already have some familiarity with Hebrew, typically biblical Hebrew. At the same time, however, that knowledge is probably rudimentary, given the stage at which most students are encouraged, or expected, to learn Aramaic. Finally, it suggests that students are likely to proceed to other Aramaic texts or other Semitic languages, whether they realize it yet or not. In other words, although biblical Aramaic is usually introduced as an end in itself, it most often functions as a bridge between the Hebrew Bible and some other, related area. ...