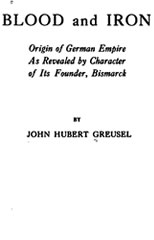 Book the first. Bismarck's Human Essence. CHAPTER 1. The man himself. Hark, Hark ! The giant's ponderous hammer rings on the anvil of destiny. Enter, thou massive figure, Bismarck, and in deadly earnest take thy place before Time's forge. It is, it must be, a large story - big with destiny ! The details often bore with their monotony; they do not at all times march on; they drag, but they do indeed never halt perman-ently; ahead always is the great German glory. Forward march, under Prince Bismarck. He is our grim blacksmith, looming through the encircling dark, massive figure before Time's forge. The sparks fly, the air rings with the rain of blows: he is in deadly earnest, this half-naked, brawny Prussian giant; magnificent in his Olympian mien; his bellows cracking, his shop aglow with cheery-colored sparks as the heavy hammer falls on the unshapen ores on the big black anvil. Thus, toiling hour after hour in thE! heat and sweat, our Pomeranian smith with ponderous hammer beats and batters the stubborn German iron into a noble plan-for a great Nation ! ...