Haag Michael - The tragedy of the Templars 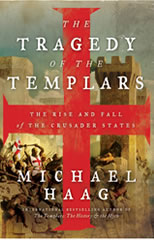 Author : Haag Michael
Title : The tragedy of the Templars The rise and fall of the Crusader States
Year : 2012

Prologue. Jerusalem 1187. ON FRIDAY 2 OCTOBER 1187, after a twelve-day siege, and less than a century after the victorious climax of the First Crusade, the inhabitants of Jerusalem surrendered their city under the terms allowed them by Saladin. Those who could afford to pay their ransom were free to walk towards the coast; those who could not pay were to be taken away as slaves. A few Knights Hospitaller were permitted to remain to run their hospital for pilgrims located in the heart of the city adjacent to the Church of the Holy Sepulchre. The knights of the Poor Fellow-Soldiers of Christ were driven out altogether – their headquarters had been the Aqsa mosque on the Temple Mount. The Franks believed that the Aqsa mosque had been built on the very site of the Templum Solomonis, as they called it in Latin, and it was not long before the knights became known as the Poor Fellow- Soldiers of Christ and of the Temple of Solomon; or, simply and most famously, the Templars. Saladin’s order to purify Jerusalem ‘of the filth of the hellish Franks’, in the words of his secretary Imad al-Din, began with the Aqsa mosque, for the Templars had been ‘overflowing with impurities’ so that ‘slackness in purifying it is forbidden to us’. The walls and floors of the Aqsa mosque and the nearby Dome of the Rock were cleansed with rosewater and incense; then Saladin’s soldiers went about the city tearing down churches or stripping them of their decorations and converting them to mosques and madrasas, ‘to purify Jerusalem of the pollution of those races, of the filth of the dregs of humanity, to reduce the minds to silence by silencing the bells’. Only the Church of the Holy Sepulchre was spared, Saladin saying that it would pay its way by charging Christian pilgrims an extortionate entrance fee. ...