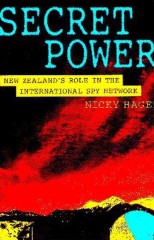 Forewords. Once upon a time life was easy for the intelligence community. Michael Joseph Savage made a mark in the sands of history with his ‘where Britain stands we stand’ declaration. It was only right that we saw the world through British eyes and, when Britain retreated, only sensible that we should go all the way with LBJ as an Australian Prime Minister (in whose memory a swimming pool in Melbourne was named) once declared. The Cold War kept us in line and on line. In the mid-1980s we bucked the system. We may have been ahead of our time on matters nuclear, but we were out of step with what was called the ‘Western Alliance’. It took a break with the United States and Britain to make the people of New Zealand aware that we were part of an international intelligence organisation which had its roots in a different world order and which could command compliance from us while withholding from us the benefits of others’ intelligence. Life at the time was full of unpleasant surprises. State-sponsored terrorism was a crime against humanity as long as it wasn’t being practiced by the allies, when it was studiously ignored. In the national interest it became necessary to say ‘ouch’ and frown and bear certain reprisals of our intelligence partners. We even went the length of building a satellite station at Waihopai. But it was not until I read this book that I had any idea that we had been committed to an international integrated electronic network. It was with some apprehension that I learned that Nicky Hager was researching the activity of our intelligence community. He has long been a pain in the establishment’s neck. Unfortunately for the establishment, he is engaging, thorough, unthreatening, with a dangerously ingenuous appearance, and an astonishing number of people have told him things that I, as Prime Minister in charge of the intelligence services, was never told. There are also many things with which I am familiar. I couldn’t tell him which was which. Nor can I tell you. But it is an outrage that I and other ministers were told so little, and this raises the question of to whom those concerned saw themselves ultimately answerable. It also raises the question as to why we persist with the old order of things. New Zealand doesn’t have much in common with Major’s Britain and probably less with Blair’s Britain. Are we philosophically in tune with Clinton’s USA? Is he? Does all of that prejudice our new orientation to Asia? There will be two responses to this book. One will be to take the easy course of dumping on Hager. He is quite small and can easily be dumped on. The other will be to challenge the existing assumptions and to have a rational debate on security and intelligence. I have always enjoyed taking the easier course but we may have been the poorer for it. David Lange. Prime Minister of New Zealand 1984–89. ...