Hall Manly Palmer - Man The grand symbol of the mysteries 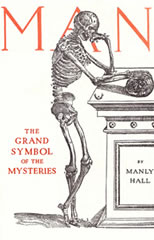 Preface to the sixth edition of man, the grand symbol of the mysteries. It would be natural to assume that in the forty years since the first publication of this volume, a wealth of further material would have become available. Actually, this has not been the case, and amendments do not appear to be necessary. It is only in the last decade that Western science has "discovered" Oriental concepts bearing upon the human body and its functions. Recent emphasis has been upon physiology rather than anatomy, and it is now obvious that Asiatic healers were aware of the theory of psychosomatic medicine. The translation of The Edwin Smith Surgical Papyrus by Professor James Breasted of the University of Chicago cast a new light on the Egyptian science of healing. ...