Hall Manly Palmer - The secret teachings of all ages 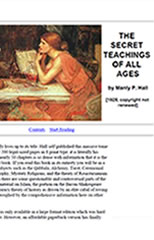 For once, a book which really lives up to its title. Hall self-published this massive tome in 1928, consisting of about 200 legal-sized pages in 8 point type; it is literally his magnum opus. Each of the nearly 50 chapters is so dense with information that it is the equivalent of an entire short book. If you read this book in its entirety you will be in a good position to dive into subjects such as the Qabbala, Alchemy, Tarot, Ceremonial Magic, Neo-Platonic Philosophy, Mystery Religions, and the theory of Rosicrucianism and Freemasonry. Although there are some questionable and controversial parts of the book, such as the outdated material on Islam, the portion on the Bacon-Shakespeare hypothesis, and Hall's conspiracy theory of history as driven by an elite cabal of roving immortals, they are far out-weighed by the comprehensive information here on other subjects. For many years this book was only available in a large format edition which was hard to obtain and very expensive. However, an affordable paperback version has finally been released (see sidebar). ...