Handbook of the NS propagandist 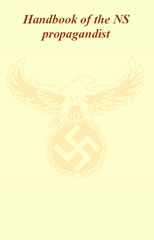 Guidelines for Propaganda. To introduce propaganda, we begin with the most important passages from our Führer Adolf Hitler's book "Mein Kampf." In Chapter 6 titled "War Propaganda," he writes: "Propaganda is a means and must be evaluated as such, from the standpoint of the goal." "It has always to speak only to the masses." "The task of propaganda lies not in the scientific training of the individual, rather in drawing the attention of the masses to certain facts, events, necessities, etc...." "It is wrong to want to give propaganda the multi-sidedness of scientific instruction." "...Effective propaganda must limit its points of a few and these points must be repeated until even the last member of the audience understands what is meant by them." "It must limit itself to a few themes and repeat them incessantly." "Each change must never affect the content of propaganda, rather must always draw the same conclusions." The Führer wrote these words as a judgment about war propaganda, and they are even more true today than they were then. The only difference today for us National Socialists is that we are not propagandizing lies and untruths as England did during the War, rather we are preaching freedom and prosperity, socialism and patriotism to our confused people. Our struggle and our propaganda have one supreme principle: to take truth and only truth as the foundation of our propaganda. ...