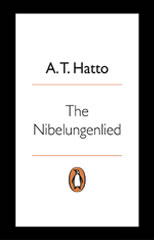 The Nibelungenlied was written in about A.D. 1200 by an anonymous poet, probably a professional entertainer, for performance at court in Austria somewhere between Vienna and Passau. ARTHUR THOMAS HATTO (b. 1910) was Head of the Department of German, Queen Mary College, University of London, from 1938 until his retirement in 1977, and was Professor of German Language and Literature at the same university from 1953 to 1977. He is now Professor Emeritus in German in the University of London. He was assistant for English at the University of Berne (1932-4), and during the Second World War worked in the Foreign Office (1939-45). From 1960 to 1977 he was a Governor of the School of Oriental and African Studies, University of London, where in 1970 he gave the Foundation Lecture, with the tide ‘Shamanism and Epic Poetry in Northern Asia’, and was elected an Honorary Fellow. In 1984 he was elected an External Member of Professor Walther Heissig’s Central Asia Seminar at the University of Bonn. His other publications include The Memorial Feast for Kökötöy - khan - a Kirghiz epic, edited, translated and with a commentary; The Manas of W. Radhff, a new edition, with new translation and commentary of Kirghiz epics; and Towards an Anatomy of Heroic/Epic Poetry (1989). In 1999 he published The Mohave Heroic Epic of Inyo - kutavêre in which A. L. Kroeber’s text is re-appraised. He was elected a Senior Fellow of the British Academy in 1991. His translations for the Penguin Classics are Gottfried’s Tristan and the fragments of Thomas’s Tristran (together in one volume) and the Nibelungenlied, and with Wolfram von Eschenbach’s Parzival, his third volume for the series, he has made available to the English - reading public a substantial portion of the finest narrative poetry of the medieval German Golden Age. Professor Hatto is married and has one daughter. ...