Hayward Joel - The fate of jews in German hands 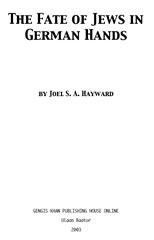 Abstract. Holocaust Revisionism is the name given to the controversial school of historical thought which challenges received opinion on the Holocaust. It is ideologically linked to the Revisionist school founded in the 1920s by Harry Elmer Barnes and other scholars. The ideological basis of Revisionism is a belief that the wider historical profession generally fails to present the origins, courses and consequences of wars in an honest and impartial manner. Whilst Holocaust Revisionists now possess a wide range of political outlooks, the movement's origins are in the postwar writings of Paul Rassinier, a French Socialist. Rassinier, formerly a Nazi concentration camp internee, believed that what actually transpired in the camps during the war was being misrepresented or even lied about by the majority of authors writing in the years immediately after the conclusion of hostilities in 1945. Particularly since the mid 1970s increasing numbers of researchers have been challenging various aspects of accepted opinion on the Holocaust. Building upon the foundation laid by Rassinier, who had comparatively few sources at his disposal, these researchers make use of the wide spectrum of primary material now available, including documents and other literary sources, original blueprints and architectural plans, and wartime aerial photographs taken by reconnaissance planes. This thesis describes and explains the development and significance of Holocaust Revisionism from 1948 to 1993. This involves identifying the Revisionists, describing what they have to say, assessing the sources and methods they employ, and arriving at an impartial and dispassionate judgement on their work. Because public and scholarly responses to Holocaust Revisionism have at times directly shaped and influenced the growth and development of this highly unorthodox school of historical thought, this study also describes and explains those responses. ...