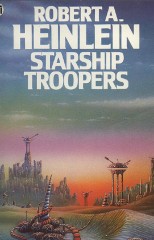 CHAPTER 1. Come on, you apes! You wanta live forever? - Unknown platoon sergeant, 1918. I always get the shakes before a drop. I've had the injections, of course, and hypnotic preparation, and it stands to reason that I can't really be afraid. The ship's psychiatrist has checked my brain waves and asked me silly questions while I was asleep and he tells me that it isn't fear, it isn't anything important - it's just like the trembling of an eager race horse in the starting gate. I couldn't say about that; I've never been a race horse. But the fact is: I'm scared silly, every time. At D-minus-thirty, after we had mustered in the drop room of the Rodger Young, our platoon leader inspected us. He wasn't our regular platoon leader, because Lieutenant Rasczak had bought it on our last drop; he was really the platoon sergeant, Career Ship's Sergeant Jelal. Jelly was a Finno-Turk from Iskander around Proxima - a swarthy little man who looked like a clerk, but I've seen him tackle two berserk privates so big he had to reach up to grab them, crack their heads together like coconuts, step back out of the way while they fell. Off duty he wasn't bad - for a sergeant. You could even call him "Jelly" to his face. Not recruits, of course, but anybody who had made at least one combat drop. But right now he was on duty. We had all each inspected our combat equipment (look, it's your own neck - see?), the acting platoon sergeant had gone over us carefully after he mustered us, and now Jelly went over us again, his face mean, his eyes missing nothing. He stopped by the man in front of me, pressed the button on his belt that gave readings on his physicals. "Fall out!" "But, Sarge, it's just a cold. The Surgeon said - " Jelly interrupted. " `But Sarge!' " he snapped. "The Surgeon ain't making no drop - and neither are you, with a degree and a half of fever. ...