Hendrie Edward - Solving the mystery of Babylon the great 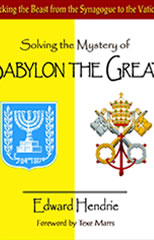 Author : Hendrie Edward
Title : Solving the mystery of Babylon the great Tracking the beast from the synagogue to the Vatican
Year : 2010

Foreword by Texe Marrs. There are few prophecies in the Holy Bible more heart-stirring and breathtaking than the image in Revelation 17 of the Great Harlot, the woman who rides upon a frightening, scarletcoloured beast with seven heads and ten horns. Imperiously dressed in purple and scarlet, with a golden cup in her hand full of abominations and filth of her fornication, the brazen Harlot is decked with gold and precious stones and pearls. The Apostle John, whose heavenly vision so vividly pictured the strange woman, noted especially the revealing name she had written upon her forehead, MYSTERY, BABYLON THE GREAT, THE MOTHER OF HARLOTS AND ABOMINATIONS OF THE EARTH. The Apostle was clearly stricken when seeing this powerful image for he was told in the vision that the seven heads of the beast represented seven mountains that the woman sat upon. The woman, Paul was told, signifies a notorious, yet great city. This is that city, said the angel in the vision, “which reigneth over the kings of the earth.” Perhaps the most terrifying of all was John’s recognition of the awful specter of death that the woman represented. “And I saw the woman drunken with the blood of the martyrs of Jesus,” testified the Apostle. “And when I saw her, I wondered with great admiration.” Some claim that there is a beautiful side of evil, enticing, dangerous, monstrous and deadly, yet somehow sickeningly alluring and inviting. It seems that even the most wicked on rare occasions possess the ability to awe the world and fill onlookers with a curious combination of macabre, mystery, and trepidation. Bible scholars say that the Apostle John wrote down his prophetic vision, which we know today as the Book of Revelation, in the year 92 AD. In the succeeding centuries, many have studied these awe-inspiring verses and have pondered and meditated on their meaning. Everyone knows how supremely important it is that humanity as a whole, but particularly the Christian Church, grasp the profound nature of these prophecies. The future of mankind itself and the destiny of every nation are bound up in this heaven-sent vision of endtime tragedy against the backdrop of divine victory. ...