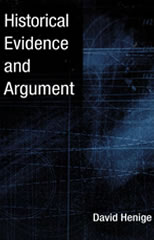 Declaiming the endtime. Who wants to fix a limit for the human mind? Who wants to assert that everything which is knowable in the world is already known ? No evidence, Cordelia, but a deep certainty. I. As the second millennium clocked down, a flurry of writing on “the end of history” appeared. This proved millennarian not only in timing, but in outlook. The end was nigh, not because historians had gone as far with the available evidence as they could, but because there was no farther to go. The past had been effectively conquered. The notion engendered some sport, then faded away. However brief its efflorescence, the incident reminds us how easy it is to proclaim victory, even when we are not sure who the enemy is. The episode mirrored earlier occasions, less millennarian in timing, but more widely embraced. Many remain certain that ours is a unique creation, despite adverting possibilities too large to contemplate. What keeps these visions alive is an egocentric belief that time and space revolve around us, that we are the acme of all that has gone before, and the omphalos of a boundless yet centered universe. ...