Himmler Heinrich - The laws of the SS Order 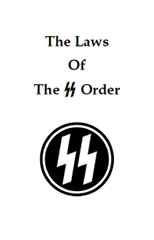 Duties of the SS-man regarding marriage and engagement 31st December 1931. 1. The SS is a selected formation of German Nordic men. 2. According to the National-Socialist worldview and understanding, that the future of our nation lies in the selection and preservation of the good and healthy blood, I am introducing from 1st January 1932 on, for all not married SS members the “Marriage approval”. 3. The goal we are striving for is a genetically valuable, healthy family of a Nordic German type. 4. The Marriage approval will be given or withdrawn only on the grounds of race and genetic health. 5. Every SS-man who wants to marry, has to receive the approval of the Reichsführer SS. 6. SS-members who will marry despite the disapproval of the marriage will have to leave of their own accord or face expulsion from the SS. 7. The professional review of the marriage applications is done by the Racial department of the SS. 8. The Racial department of the SS keeps a “Family book of the SS” containing a register of the families of SS members, which are entered either after marriage approval, or special application for entry in the book. 9. The Reichsführer SS, the leader and officers of the Racial department are sworn to confidentiality. 10. The SS knows that with this order it has made an important step. Mockery, contempt and misunderstanding will not touch us – the future belongs to us ! ...