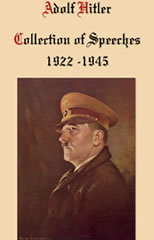 Adolf Hitler – speech in Munich. April 12, 1922. fter the War production had begun again and it was thought that better times were coming, Frederick the Great after the Seven Years War had, as the result of superhuman efforts, left Prussia without a penny of debt: at the end of the World War Germany was burdened with her own debt of some 7 or 8 milliards of marks and beyond that was faced with the debts of 'the rest of the world' - the so-called 'reparations.' The product of Germany's work thus belonged not to the nation, but to her foreign creditors: 'it was carried endlessly in trains for territories beyond our frontiers.' Every worker had to support another worker, the product of whose labor was commandeered by the foreigner. 'The German people after twenty-five or thirty years, in consequence of the fact that it will never be able to pay all that is demanded of it, will have so gigantic a sum still owing that practically it will be forced to produce more than it does today.' What will the end be? and the answer to that question is 'Pledging of our land, enslavement of our labor-strength. Therefore, in the economic sphere, November 1918 was in truth no achievement, but it was the beginning of our collapse.' And in the political sphere we lost first our military prerogatives, and with that loss went the real sovereignty of our State, and then our financial independence, for there remained always the Reparations Commission so that 'practically we have no longer a politically independent German Reich, we are already a colony of the outside world. We have contributed to this because so far as possible we humiliated ourselves morally, we positively destroyed our own honor and helped to befoul, to besmirch, and to deny everything which we previously held as sacred.' If it be objected that the Revolution has won for us gains in social life: they must be extraordinarily secret, these social gains - so secret that one never sees them in practical life - they must just run like a fluid through our German atmosphere. Someone may say 'Well, there is the eight-hour day!' And was a collapse necessary to gain that? And will the eight-hour day be rendered any more secure through our becoming practically the bailiff and the drudge of the other peoples? One of these days France will say: You cannot meet your obligations, you must work more. So this achievement of the Revolution is put in question first of all by the Revolution. Then someone has said: 'Since the Revolution the people has gained Rights. The people governs!' Strange! The people has now been ruling three years and no one has in practice once asked its opinion. Treaties were signed which will hold us down for centuries: and who has signed the treaties? The people? No! Governments which one fine day presented themselves as Governments. And at their election the people had nothing to do save to consider the question: there they are already, whether I elect them or not. If we elect them, then they are there through our election. But since we are a self-governing people, we must elect the folk in order that they may be elected to govern us. ...